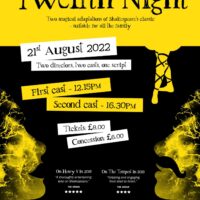 This year marks our sixth straight year performing at Brighton Open Air Theatre and the second year that we’ve attempted two productions on the same day.

Once again, on just one week’s rehearsal, Luke and Aaron will be placing their own creative take on our one hour script.

The world is a strange and worrying place at the moment and there is no area better than a stage to transport us into a fantastical realm of fools and foolery.

Inherently, Twelfth Night has difficulties. There are a number of underdeveloped character journeys and we are expected to approach it with a healthy acceptance of Shakespeare’s ‘theatrical licence’. Taking those various disconnected paths and fine-tuning it to an hour demands even more from you, the audience!

Having said that, these weeks are about fun and escapism. A chance to play with a language that is at the heart of our theatrical history and to address Shakespeare’s writing in a way that it was meant for – through performance.

I was lucky enough to have an English teacher who taught us Shakespeare by getting us out of our seats and ‘acting’. I have fallen in love with it ever since. The vision for these yearly weeks is to enable other young children and teenagers to equally embrace that love and to be inspired by the language and the theatricality that Shakespeare demands.

I am hugely grateful and delighted that we can bring together two amazing casts of young actors once more.

If you’d like to learn more about YAG or try out one of our term time weekly classes, then do take a look at our website. Enjoy the show!

Father Felix Mascarenhas and Church of the Good Shepherd

Every parent, grandparent, aunt, uncle, brother, sister and friend who are supporting their young actors today and throughout their lives.

"The quality of acting in such young performers was a truly pleasant surprise."